Jo Caseley offers us her most personal and honest songs yet with Albany, an alt-country album drawing influence from Bonnie Raitt and Patty Griffin, delivered in a style that's completely her own. Released independently by Flynnella Records.

Jo Caseley is an Australian singer/songwriter, independent recording artist and host of "The Old Mill & Railway Sessions" -  intimate hall concerts in the Southern Highlands where she regularly collaborates with some of the finest alternate country, blues & roots artists touring the country. 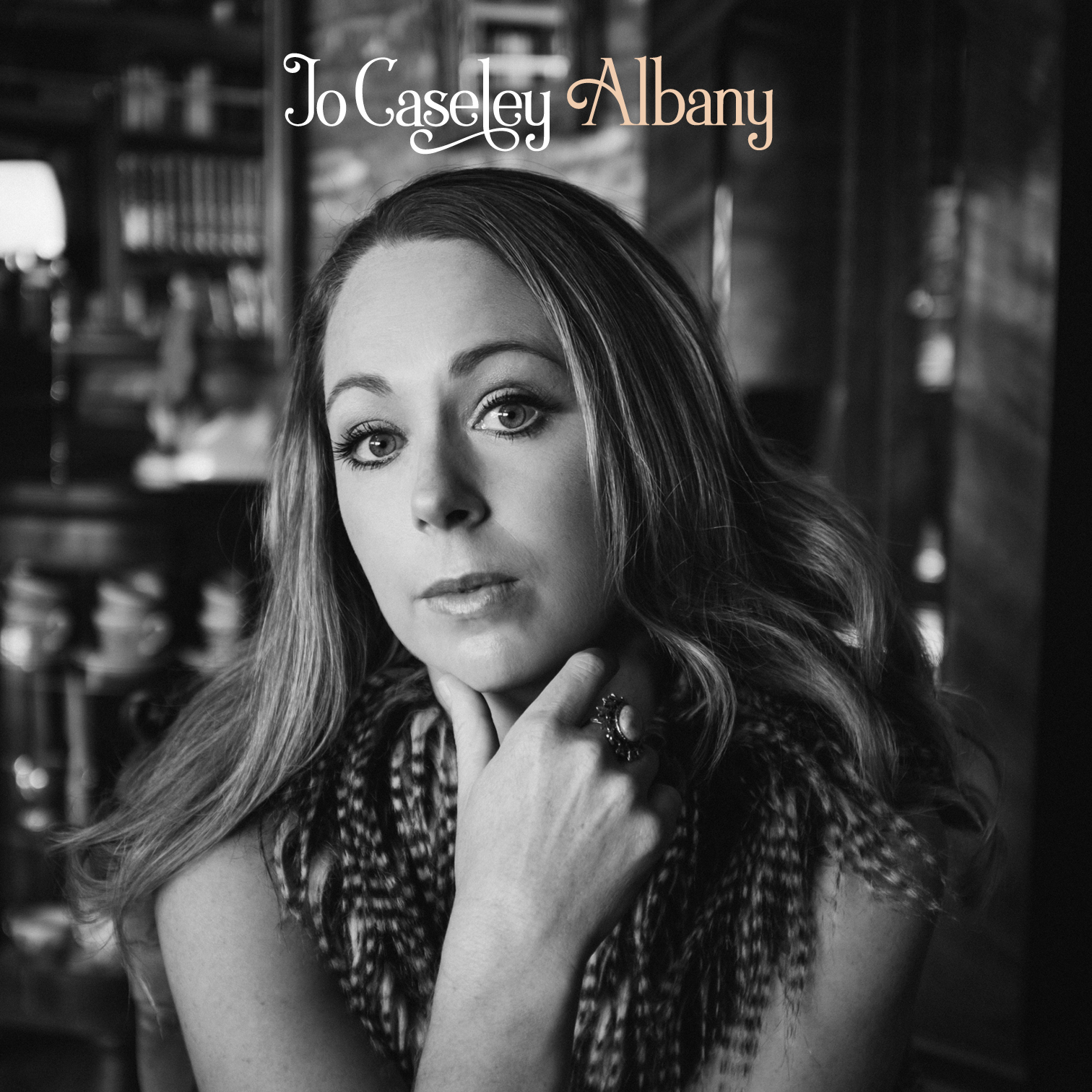 Producer and multi-instrumentalist Syd Green plays just about everything else on the record.

His tasteful approach has allowed Caseley to do the story-telling with the freedom to move between genres with songs inspired by Ryan Adams, Mary Gauthier, Neil Young and Janis Joplin, delivered in a style that’s completely her own.

Songs from the album released have already gained National airplay including ABC radio, achieved semi-finalist status in the 2015 International Songwriting Competition and the Unsigned Only Music Competition.

The album reached #4 on the iTunes singer/songwriter charts when released digitally and has attracted positive reviews from The Sydney Morning Herald's Bernard Zuel and Post To Wire's Chris Familton, the latter remarked "She can deliver a soulful jazz-inflected croon as convincingly as a raunchy country-rock holler and a sweet country-pop serenade. That range, combined with her affecting stories makes Jo a manifold and endlessly fascinating songwriter."

The title track was written in Albany, Western Australia, whilst Caseley took a grass roots approach and toured nationally for 7-months with her husband, two young children and caravan in tow to many outback remote areas to promote her previous release Dusty Dirt Track.

After visiting the Desert Corp Memorial and later that day swimming in the same water that sailed the first two convoys of Anzacs to Gallipoli, Caseley found herself grief stricken for the soldiers who never returned and the war widows left behind, and felt a woman trying to tell her story. She listened whilst letting the waves of the ocean break over her and by the time she returned to her touring van and picked up her guitar in open DADDAD tuning, Albany was born.

Co-written with Chambers, The Baby’s Cry tells the heartbreaking story of Caseley’s American/Welch heritage. Her great-grandmother sailed from Wales to the USA in 1911 to hide her illegitimate pregnancy. After giving birth to Caseley’s grandfather, she abandoned him, leaving him to a stranger before sailing home to Wales with tales of a wonderful Wild West adventure.

It’s songs such as these that show the depth of her writing. Moving, evocative songs that can’t be faked. But before emotions get too bogged down with songs such as Come Home; a woman’s plea for her man to get home safely after drinking, she breaks the ice with great tongue and cheek with songs like Can’t Keep My Panties On, Baby Don’t You Love Me and I Think I’m Losing It.

The catchy single Ain’t Love The Sweetest Thing features John Kane on mandolin and was written for a friend who asked Caseley to sing at her wedding. In Dreamin’ Bout the River, Caseley uses the river as a metaphor for her youth and delves back in time to her carefree younger days.

Theres a song each for the three men in her life. The Cattle Truck is an intimate tribute song for her father written about their bond forged over years of travelling together to country shows in a cattle truck, Sonny Boy was written after her then 4 year old told her he would look after her when she was old and grey, and Keep The Wolves from the Door is about her mechanic husband and one for the hardworking tradies who give up so much to keep food on the table for their families.

Caseley hosts The Old Mil & Railway Sessions, intimate hall concerts held in her Southern Highlands village home of Penrose which she created in order to perform locally in an sympathetic environment whilst networking with other artists. Her sell-out concerts have featured artists such as Bill Chambers, Kevin Bennett, Lachlan Bryan, Allan Caswell, Harry Hookey & Lou Bradley.

With 6 years since her last release spent honing her craft from some of the greatest songwriters in the country, Caseley offers us her most personal and honest songs yet with Albany; an inspirational album of home truths and the joy found between life’s up and downs.

An independent release, the album is available personally signed from the artist via the Store from the web page, or as a digital download.

Time to shoot a music video!! 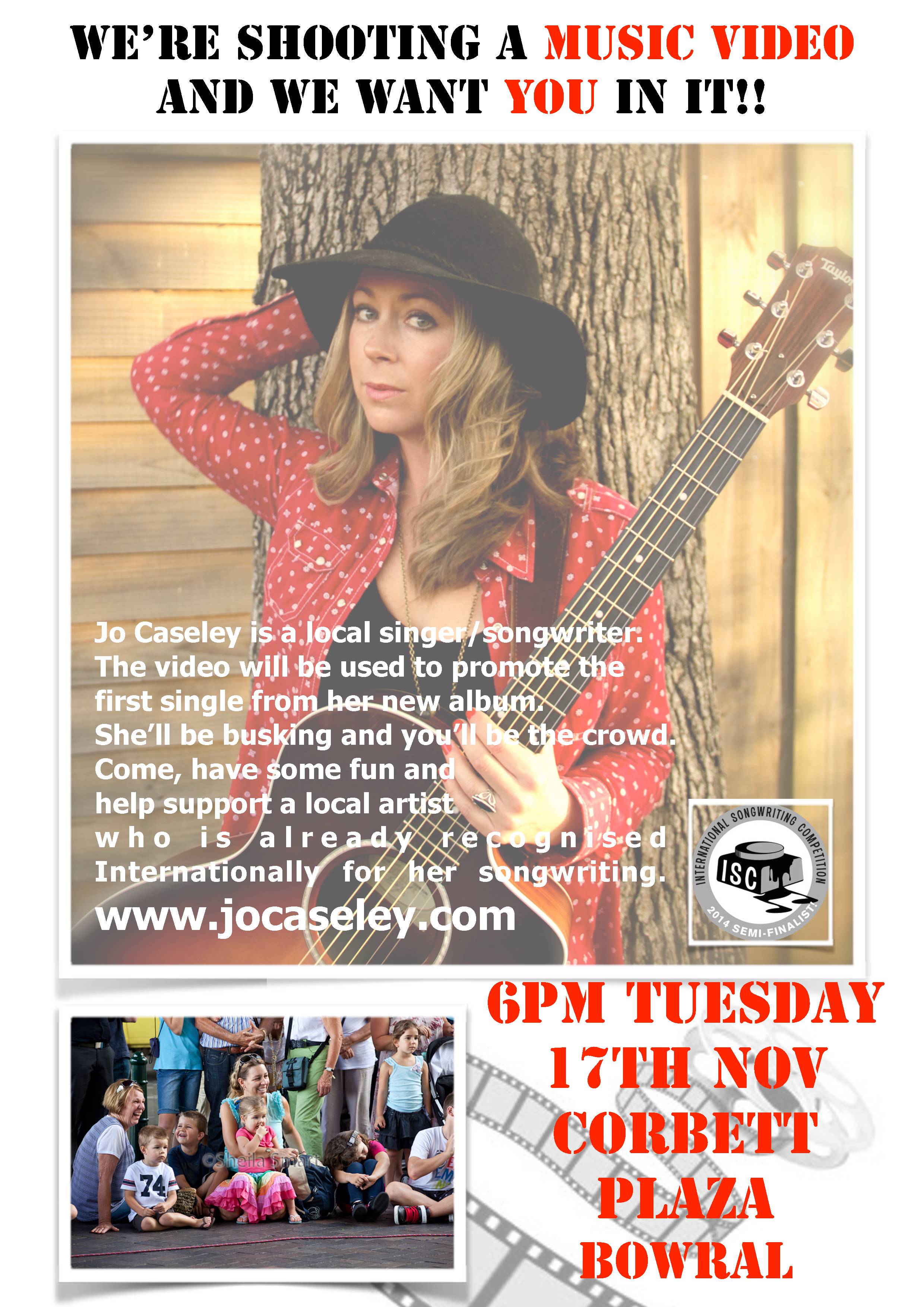 I'm really excited to be getting organised for my first video shoot and I'd love you to be in it!!
We'll be shooting the clip for Ain't Love The Sweetest Thing at Corbett Plaza in Bowral at 6pm, Tuesday 17th Nov.
Please come along and bring your friends!!

With two weeks to go, the last Old Mill & Railway Session for they year has SOLD OUT.
Thanks to all my loyal supporters who got in early to secure their tickets.
I know there will be many serious Kevin Bennett fans in the audience (I am certainly one of them), and I'm just so grateful that he will be joining the list of amazing artists who have played at the Penrose Hall.
Can't wait for this!! 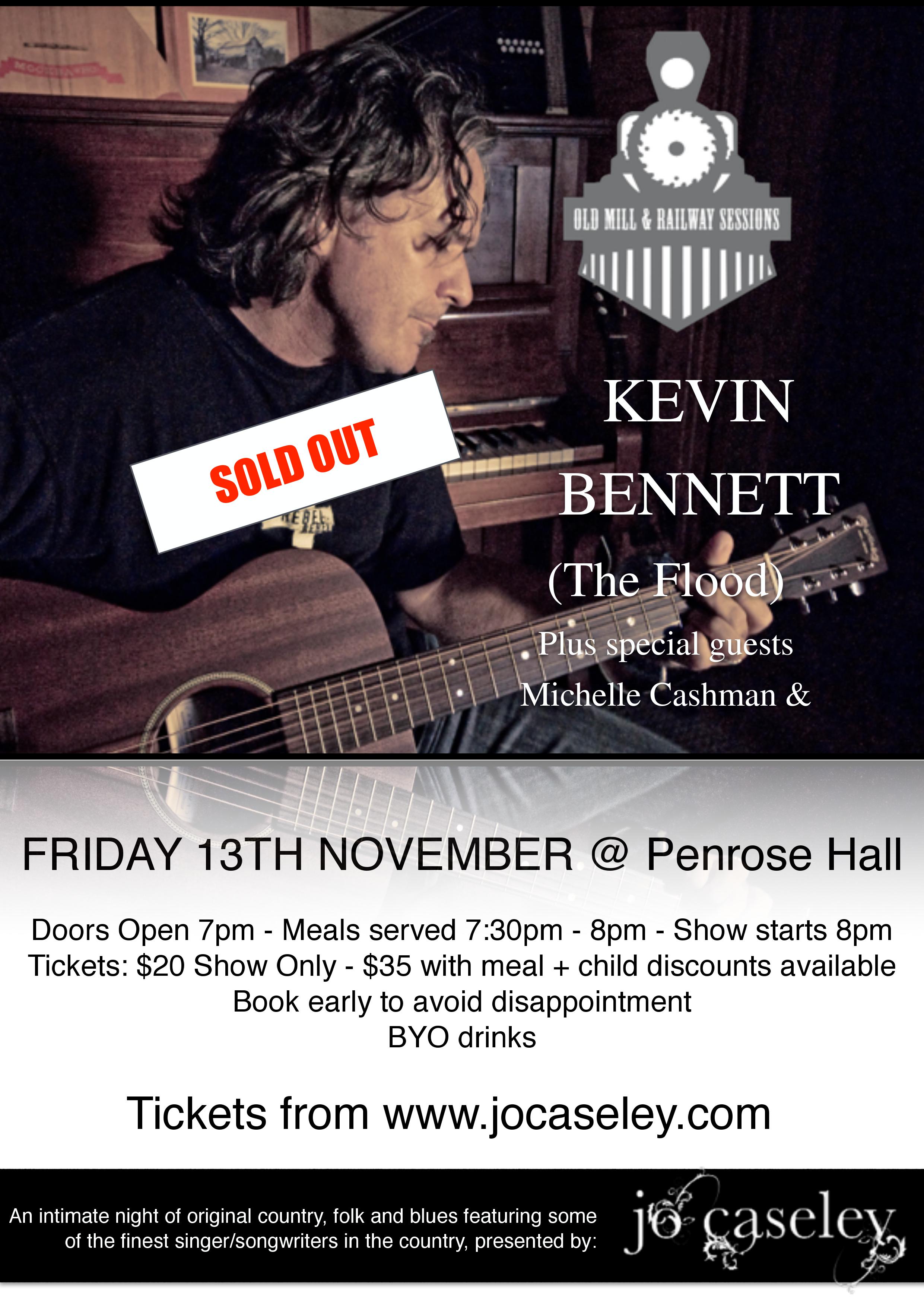 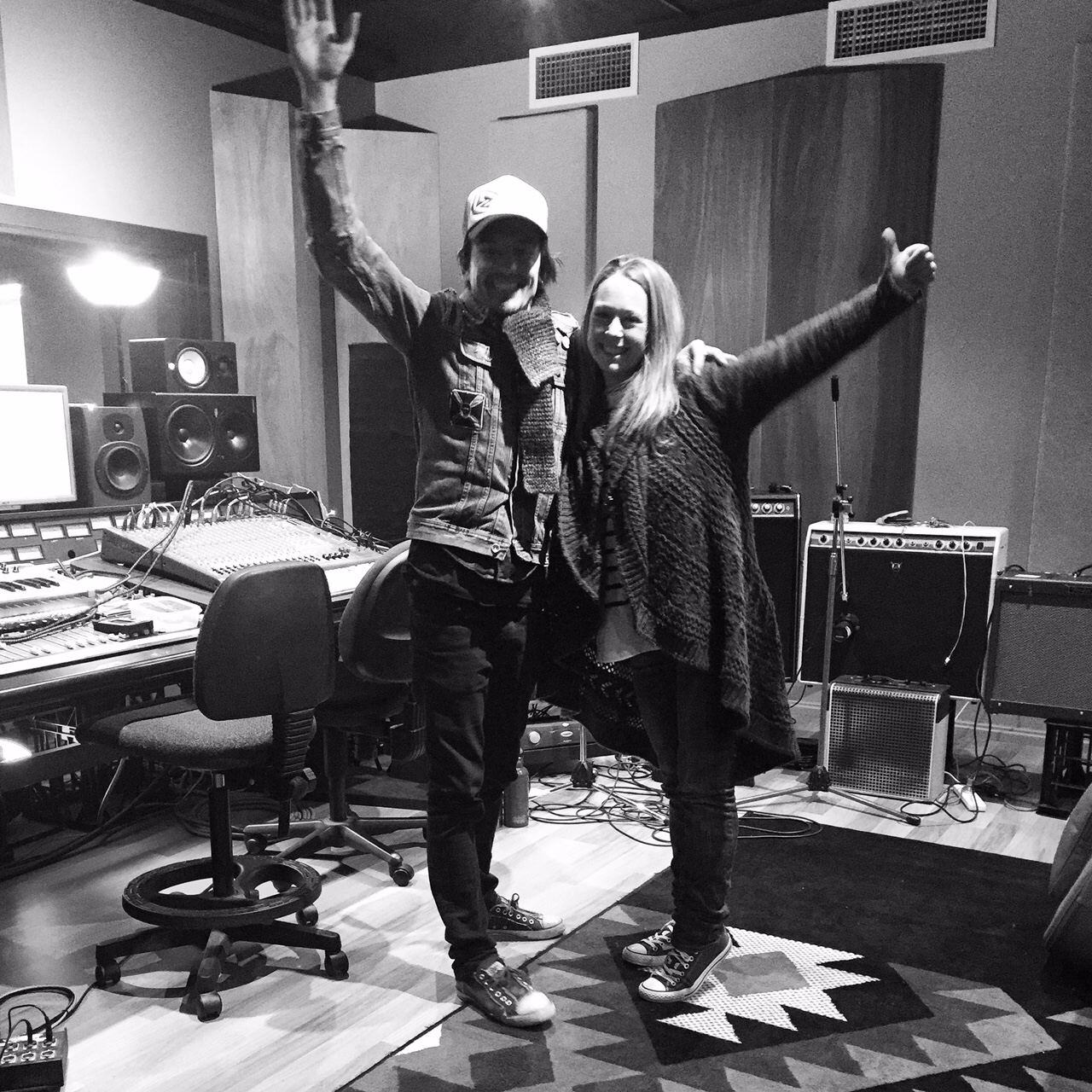 Here we are! My producer Syd Green and I celebrating the final day in the Mono Nest studio in Nowra recording the new album.

I found the recording process of this this album my most challenging yet. As a producer, Syd went above and beyond, pushing me harder then I've ever been pushed to find the real Jo Caseley. That kinda frightened the shit out of me. It's easy to fall into old comfortable habits. It's easy to try to sound how we want to sound without realising we are doing it.

I definitely had to raise the bar for this album, finding myself and being true to myself as an artist and I know I've done that.

There are 11 original tracks and they are my most honest yet. I'm really proud of these songs.

Now mixed and being sent away for mastering to Jeff McCormack to work his genius, I can't wait to hear this album and set these new songs free!!

So humbled to have two songs reach semi-finalist status in Nashville's 2015 Unsigned Only Music Competition. Both Albany and Dreamin' Bout The River have caught the ears of the judges. It's the greatest compliment an independant singer/songwriter could wish for! 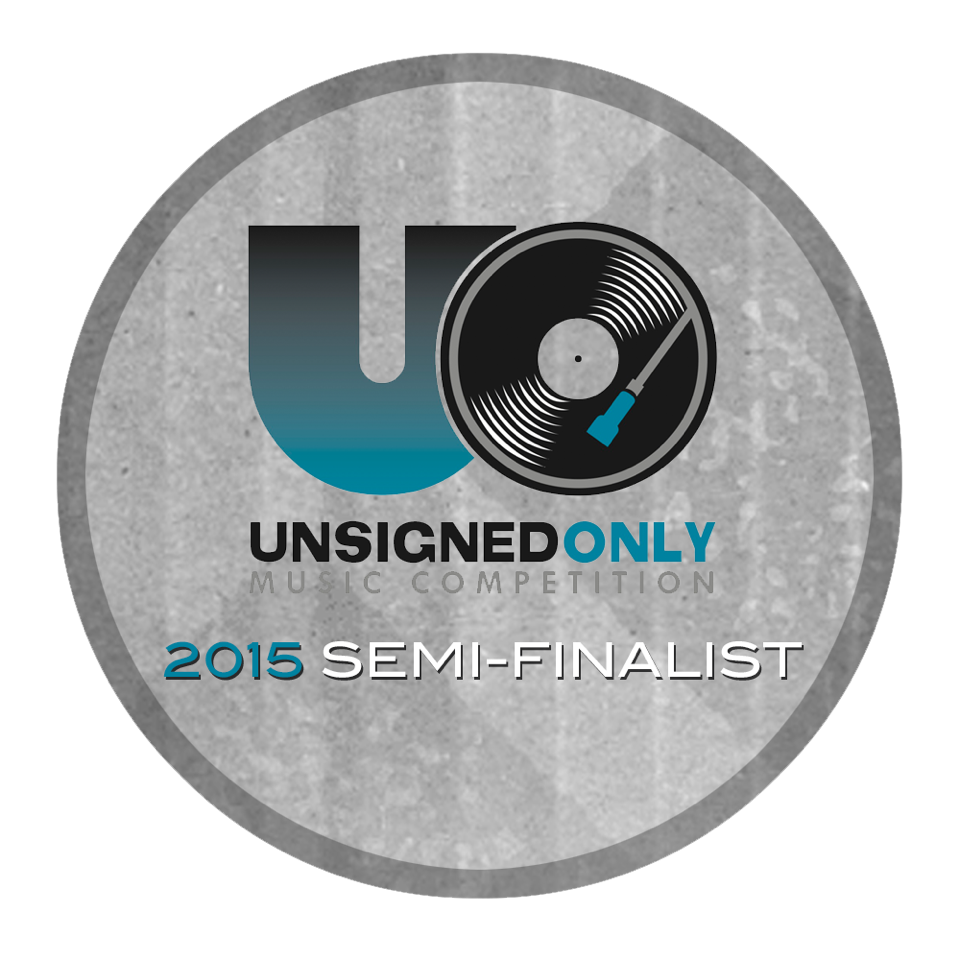 Locals Night by the fire

Enjoy local's night in front of the fire with some special original tunes and some of my favourite covers.

An amazing weekend retreat. Release yourself from suffering as we move forward on the journey of healing and self discovery. Connect with the wisdom of your soul and find peace through healing to connect with your authentic self, awaken your spirit and raise your consciousness. We are here to grow. I will of course be sharing my special songs as we walk this path together.